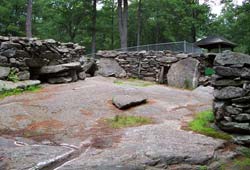 The 4,000-year-old stone ruins of America’s Stonehenge command respect. The passing millennia, the elements, and the cultures that evolved and perished around this sacred megalithic complex have all made the series of stone walls, structures, and giant carved rocks on this granite hilltop in Salem, New Hampshire a wizened enigma. Finding a stone wall in the forest of a small New England town is by no means an anomaly, but finding these stone walls joined with intricate man-made stone chambers and lining up with enormous arrowhead-like monoliths that mark lunar and solar positions during events such as solstices and equinoxes, makes this place an archeological and spiritual question to ponder.

There is evidence pointing to the Celts as being the architects and builders of this site in New Hampshire — something that would cause a problem for a lot of U.S. history books. Some of Christopher Columbus’s European ancestors may have beaten him in the race to the new world by as much as 3500 years! I recently “discovered” America’s Stonehenge with some friends on a hot July day.
My first stop en route from the parking lot to the sacred site was the America’s Stonehenge museum, gift shop, and snack bar. I spoke with Dennis Stone — he and his wife Pat run the site. I learned from Dennis that this is a family business started by his father, Robert Stone, in 1957. Originally called “Mystery Hill,” Robert Stone set up the site as an open air museum to offset the costs of research.
I began my hike behind the museum building, ascending a gentle woodchip-covered trail past fenced-in alpacas, a few modern stone art pieces, and some carved wooden animals — also modern (and by modern, I mean no more than 10 years old).

Along the trail to the main site, I passed a few points of interest — a structure called “The Watch House,” a small stone hut built into the side of the hill. The structure is aptly named, as it looks like a pre-historic military bunker. I also passed an ancient well and a fire pit — very little remained of both.

The next leg of the trail offered the final climb and first view of the main site. At first glance, I was disappointed. I didn’t expect the towering grandeur of the Stonehenge in England, but I did expect to be immediately awed by a sense of “How could these ancient people have possibly constructed this?”

The stone walls and structures are built low to the ground, and some are built into bumps and dips in the terrain. The tallest structure is maybe eight feet — though one side abuts the giant granite slab that is the predominant foundation feature on the hilltop. So America’s Stonehenge didn’t immediately marvel me, but as I examined each formation more closely, my opinions began to change, and my sense of wonder increased. I wasn’t asking how they did it, but I was certainly asking why.

“We think it’s a religious site because of the size, shape, and orientation of the structures,” Dennis Stone said. “They’re kind of small, so they would be kind of hard to live in. We think it might have been used for temples, especially the really small ones [structures].”
When I walked onto and up the huge granite slab that is exposed on the hilltop, I could imagine how this would be a stage of sorts. There are many positions and platforms surrounding the central area where on-lookers could easily view the center below. Obviously a great deal of precision and effort went into construction here, so why would these ancient peoples build something that was too small to offer any significant amount of storage, and certainly too small to live in? It must be a place of ceremony.

From the top of the hill, I saw wide tracts through the forest that ran in straight lines crossing over the main site. Near the center of these tracts within the stone walls are large pointer stones. These monoliths were carved with stone tools, a sign of ancient construction and they mark significant solar and lunar events when lined up with a second point of reference on the main site. The markers offer further evidence of the area’s antiquity — mainly because they don’t quite line up perfectly anymore. Stone said, “The solstices don’t quite work today, because the Earth’s tilt has wobbled. We had our site professionally surveyed from 1973 to 77; we put in all of the site’s coordinates and sent it off. The Harvard Smithsonian Center for Astrophysics took our computer tape and told us that around 1800 B.C. your alignments would work, plus or minus a century or two. And the oldest carbon dating we have of the main site is from 2000 B.C. That’s why we say 4000 years old.”

Today, religious groups and native peoples come in to experience the land and sometimes to hold sacred ceremonies. For example, I saw a mound of dirt covered with flowers from the recent summer solstice celebration. Stone explained how many spiritual groups have come to experience the area’s magic. He said, “We’ve had the Wiccans from New York City, more recently we had the Mayan here — a healing ceremony, and that’s been going on for a couple of years. We’ve also had a Peruvian healing doctor up here performing ceremonies. They usually do that on one of the big days like the solstice.” 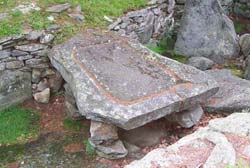 The most curious structure in America’s Stonehenge is its “Oracle Chamber” and the attached “Sacrificial Table.” Coming down the granite slope of the bald hilltop, I looped around and walked down some stone steps into the dark and dank “Oracle Chamber.” The temperature was notably cooler compared with the open air, and the rock walls dripped with water. Inside was just enough clearance to walk through. The chamber is T-shaped; about halfway into the chamber, another tunnel shoots off 90 degrees to the right. Where the two tunnels intersect is a small tunnel formation built through the wall called the “speaking tube.” The other end of the tube comes out under the sacrificial table — a large bell-shaped stone slab with a groove carved around its edges — similar to a carving board I have in my kitchen used for catching the juice from cooked meat. I would learn the analogy was very close to the mark. Dennis Stone said, “The table is about 9 feet by approximately 6 feet in width, it’s a bell shape, and it’s about a foot thick. It weighs about 4 1/2 tons. It’s attached to the Oracle chamber. If a person was on their back, by the left foot the rectangular drain goes off and it drains right by the left foot. And there’s a cutout in the bedrock where a vase could sit. You could use your imagination.”

Stone is cautious to make any definite claims, but given the size and shape of the rock, it’s not difficult to imagine human sacrifice happening on its surface, especially considering the great care in positioning the table above the speaking tube and Oracle Chamber. A ceremony of some importance obviously occurred at this spot.
We do know there were Native Americans living in New Hampshire since at least 10,000 B.C.E., so maybe they built this structure? Maybe, but working in stone was not their style. The Native Americans built structures of wood and animal hides. There’s genetic, linguistic, and archeological evidence that Europeans, Mediterraneans, and even Africans were crossing the ocean thousands of years ago. Barry Fell, who was a professor at Harvard and founder of the Epigraphic Society, felt that markings found carved into rocks in North, Central, and South America point to transatlantic voyages of Phenetians, Libyans, and Celts. Additionally, Fell found that many Native American words for different rivers, valleys, and gorges had a Celtic counterpart in Europe where the meaning of the word was virtually identical. “These people coming over somehow had to either fight or they worked together,” Stone said. “And that’s why the site is kind of confusing, because I think there was some assimilation of cultures going on.”

America’s Stonehenge has power and energy in its design and age. It may very well represent an unanswerable question, but it’s a question that’s still worth exploring. This mysterious hill in Salem, New Hampshire is not the only site of stone ruins and megaliths in the northeastern United States. Connecticut, Massachusetts, New York, and many other locations have revealed evidence of ancient builders leaving their fingerprints of stone. This is a spiritual place. Science is providing some evidence, but meaning will come from within each visitor. To me, America’s Stonehenge is a reminder that ancient people were sophisticated in their math and astronomy, and deliberate in their spirituality. The site is a perfect blend of science and spirit — something our modern world tries to keep separate at all costs.